Richard Driscoll is out of prison and wants you to fund his next movie! 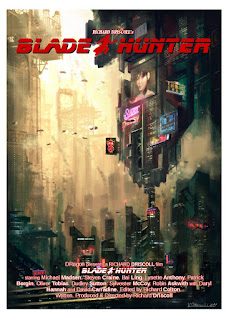 It's the moment we've all been waiting for. Richard Driscoll has walked free from prison, having paid his debt to society. And what the first thing he' has done? That's right - resurrected one of his old rip-off projects.

For years, Driscoll talked about making something called Blade Hunter that was so shamelessly plagiarised from Blade Runner it would make Philip K Dick turn in his grave. Well, now he's trying to get it off the ground again, but instead of a dodgy tax deal, he's going to crowdsource the movie via Indiegogo!

It's late and I need to go to bed. I'll blog about this tomorrow, and discuss why you should or should not consider contributing to this project.

But for now, let's just welcome back to the cinema industry the worst film-maker in Britain, the UK's own answer to Ed Wood, the man, the legend, the lawsuit - Mr Richard Driscoll!
Posted by MJ Simpson at 00:11