All the new British horror films released in 2017

This was the first year that the number of new British horror films passed 100. In fact there were 107 UK horror features in 2017, meaning an average of two a week. How many have you seen? How many have you heard of? (I've managed to catch 27 of these so far.)

As ever, I define a film as 'released in 2017' if this year saw the first chance for someone to watch the movie - whether in a cinema, on DVD, on demand or just posted on YouTube - without attending a special event. Some of these films played festivals or had other one-off screenings in 2016 or earlier years.)

Please let me know of anything I've missed, or any other corrections. 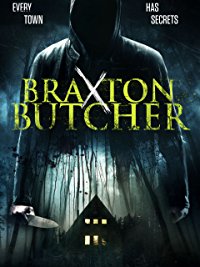 Once Upon a Time at Christmas 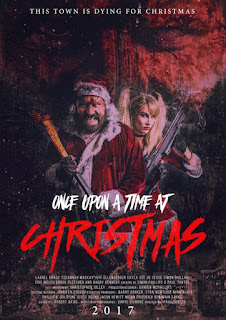 Enjoyable festive slasher set in a small town in New York State where a disgruntled psycho in a Santa suit is committing murder on a daily basis, assisted by an insane girl-woman obviously modelled on Suicide Squad’s Harley Quinn. Annoying mall-hanging teenagers are thankfully despatched early as the story concentrates on the Sheriff and Deputy trying to cope with ever-increasing piles of bodies. You’ll work out what’s happening about half through, after which it becomes increasingly unbelievable that the cops haven’t. But that level of unbelievability is part of the fun of a good slasher, along with some cheesy coincidences, and the script (based on a story by Phillips - in the Santa suit - and Tanter, who cameos as a coroner) walks that fine line commendably. Filmed in Canada, this premiered at the British Horror Film Festival in London in October 2017. A sequel was announced almost immediately after release.
Posted by MJ Simpson at 12:13 No comments: 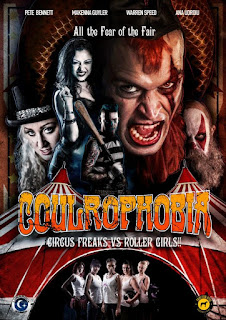 There’s passable gory fun to be had in this oddity from the director of Zombie Women of Satan in which a group of female friends are terrorised in the woods by four ‘circus freak’ siblings. The young women are made up as clowns before being subjected to abuse, humiliation, torture and casual murder. Eventually the family’s equally freaky father turns up, recently released from prison. There are occasional cutaways to their uncle and flashbacks to their mother’s death but that’s pretty much it for the plot of what is best categorised as ‘eccentric torture porn’, the bizarre costumes and characters ameliorating what would otherwise have been tedious brutality. The victims are a roller derby team but, despite some skating shots topping and tailing the main story, that’s completely irrelevant, sadly negating the ‘Circus freaks vs roller girls’ high concept tag-line. British horror regular Bennett steals the show as a crazed jester. Shot June/July 2014, it was temporarily retitled All Clowns Must Die during post-production.
Posted by MJ Simpson at 11:15 No comments: 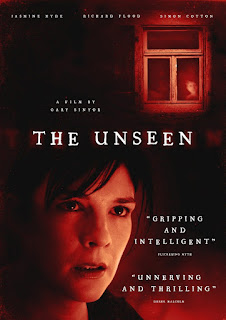 When I closed this site back in July, my intention was that I would post my annual listing of the year's UK horror features each New Year's Eve and that would be it. Nothing else here, and no reviews on my main site.

Since July, freed of the need to watch films and write long, detailed reviews (which sometimes took a week to complete), I've actually watched a lot more movies, ploughing through my BHR masterlist (though making frustratingly little headway - they get released as fast as I watch 'em). Each film has elicited a 200-word review as I gradually build up an encylopedia of British horror 2000-2019 which I would very much like to publish in a few years, if I can find a willing publisher.

I'm still on some PR mailing lists, and still have film-making friends, so still get offers of screeners, which it would be unfair to accept without offering something in return. Having umm-ed and ah-ed for some time, it seems to me that the best solution is to write my 200-word capsule reviews for my mooted book, but to also post versions of them on here when the film is a new work which I have been sent.

Thus there is no extra work for me, but I can still offer film-makers and publicists a fair, honest review. So do please feel free to send me screeners (of new British horror features only) and I will post reviews here. Just a bit shorter than before. Starting with this one.

And do watch out for my annual round-up in three weeks' time.
Posted by MJ Simpson at 17:31 No comments: