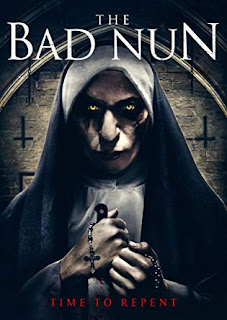 Shot in June 2008 with a bundle of recognisable names and faces, Edwards’ only film nevertheless managed to remain in complete obscurity for a decade before coming to accidental light. Hopkins is half of an Anglo-Aussie couple whose relationship is in trouble. Her philandering hubby is preyed on by a vampire whore and her human pimp but escapes, though not without taking a bite and suffering the effects. The film’s biggest problem is that it’s never clear which is the main story: the breaking-up couple or the tragic vampire (Gilmour) who has some good dialogue on the loneliness of immortality. Kay is a nurse tending to the guy’s ill father; Impey and Bakshaev have cameos as earlier victims. Music by Preteneratural helmer Gav Chuckie Steel. Shot in black and white and (bizarrely) what appears to be Academy ratio, this was released on YouTube in July 2011 as a seven-episode serial.
Posted by MJ Simpson at 21:36 No comments: 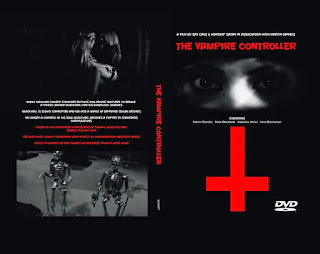 Not listed on IMDB, barely even findable on Google, never reviewed anywhere and only released in a limited run of 100 DVDs sold through eBay, this 54-minute sub-feature – the bastard stepchild of Jean Rollin and Cradle of Filth – is arguably the most obscure British vampire film ever released. A Lugosi-esque black magician (Daniels, also credited with the original idea) orders two female acolytes (singer Bremerton and performer Wilton) – who we only know are vampires because we’ve read the sleeve – to seduce, kidnap and abuse a priest (Blackwell). That’s about it as far as plot goes, with director Black (A Girl) more interested in imagery and sound. Artsy and gothic, this manages to be both impressionist and expressionist and would probably function better as a video installation in a gallery or nightclub rather than as a narrative feature. Composer Boswell (Lord of Illusions, Dust Devil) plays a Monseigneur in occasional cutaways, with model/performer Disgrace (Spidarlings) as his cleaning lady. The discordant soundtrack features cuts from Noise Collector, Salapakappa Sound System, Serpentina, Silencide and others.
Posted by MJ Simpson at 17:35 No comments: 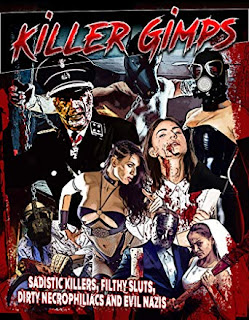 Shared flatpack anthology with each director helping the other in various capacities on both sides of the camera. Kieran’s segments are Underworld: The Dark Web (mockdoc of policeman investigating body parts smuggling), Disorder (newly pregnant policeman’s wife raped and murdered by man in gimp costume), Boxing Day (Yuletide found footage), Nightman (gasmask-wearing killer murders policemen, with Slasher House director MJ Dixon as an additional victim) and two brief vignettes. Jason contributes Two Tales of Terror (brace of faux silent movies, incorporating footage from Sick Bastard), Lust (woman fucks skeleton then gives herself home abortion in the bath), Inner Voice (bulimia) and Gimp. This last, in which Impey plays himself (he says he’s working on Troubled), has an undead gimp take revenge on a sleazy film distributor who has dressed as a Nazi officer to entrap a dominatrix(!). Repeated use of actors and locations (mostly the director’s homes) give this an almost Twilight Zone weirdness. First released on limited VHS in September 2017 (minus Inner Voice) as Necrophiliac and the Killer Gimps, it popped up - retitled and expanded - on DVD the following March.
Posted by MJ Simpson at 16:17 No comments: 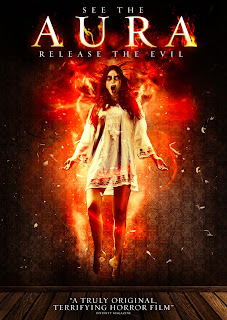 Mitch and Diane, an Anglo-American couple with a baby on the way, move into a house inherited from Mitch’s creepy uncle, despite the disapproval of his fundamentalist Christian mother. Old ‘Kirlian’ photographs inspire Mitch to rescue his long-incarcerated sister from an asylum. The actual ‘aura’ schtick is somewhat underused and largely incidental to what is, rather, a commendably solid tale of demonic possession – bolstered by a great turn from Lenska as a psychic trying to dispel the evil presence. For the first product from his Hereford Horror label, Sothcott offered capable microbudget helmer Lawson (Hellriser, Killersaurus – but not Dead Cert) a step up the budget ladder. Lawson still uses his restrictions well, with limited cast and locations, but better actors and an actual crew (and a set that isn’t a Loughborough lock-up!) allow him to concentrate on fluid camera-work and smooth performances. Moreno is particularly creepy as the sister. Lawson regular Dolton plays the uncle in a prologue. Shot in the USA in December 2017. Sothcott and Lawson swiftly reteamed for Pentagram.
Posted by MJ Simpson at 21:13 No comments: 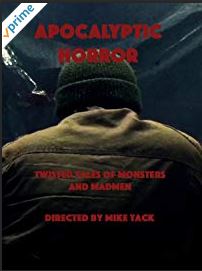