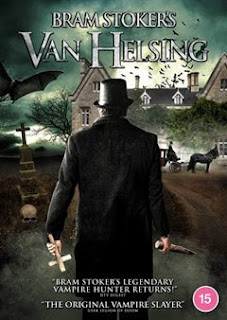 The latest feature from Lawson’s Leicester-based Creativ Studios (funded and distributed by High Fliers) is based on Dracula, or at least the part of Dracula after the Demeter arrives but before the Harkers return from Budapest. Reigning British horror princess Bond has a ball as the ailing Lucy who goes from simpering coquette to full-on monster. Topping is subtle and restrained in the title role, dealing with Lucy’s illness and the jealousy between fiancée Arthur and spurned John (there’s no Quincy). Neither V-word nor D-word is mentioned, and the Count is seen only briefly as a faceless figure. Steve says that he treated this sub-story as analogous to The Exorcist and it’s a refreshing take, although the film is distinctly short on action. The overly talkie second act drags somewhat but things perk up when Lucy starts flying to London to attack street whores (not part of the novel!), murders which The Times credits to Jack the Ripper. Creativ regular Crevel pops up at the end as Mina, teasing a possible sequel. Filmed in 2020 at Pipewell Hall, Northants and against a variety of effective digital backgrounds.