England’s most reviled county, titular location of so many awful crime films, is finally redeemed with this impressive micro-budget zombie epic that has moments of genuine brilliance. After a sudden zombie apocalypse, a handful of survivors set off for the coast, gradually losing members along the way. The boilerplate plot is leavened by fine characterisation, especially Burridge as the squaddie leading the group; both script and actor make him a believable soldier rather than a gung-ho actor playing dress-up. Locations, characters and dialogue are all distinctively local without falling into parody, and local support is evident in terrific scenes featuring dozens of abandoned vehicles and hundreds of zombie extras. With some enjoyably gory deaths, numerous moments of both humour and pathos, and a cameo by Russell Brand (sadly not eaten by the undead). The actual film runs 100 minutes but sit through the 16-minute credits for funny out-takes and great jokes in the text crawl. Mostly shot in 2012/13, four years of pick-ups and post pushed the release back to 2018.
Posted by MJ Simpson at 12:55 1 comment: 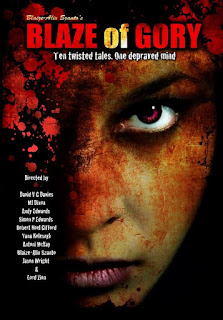