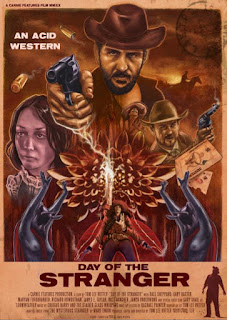 The list of British westerns is fairly short and frankly a bit odd. Which is also a perfect description of Thomas Lee Rutter’s latest feature. Rutter is the West Midlands auteur who gave me a couple of early credits in his slasher Mr Blades and his werewolf romp Full Moon Massacre. Now he’s working with real actors like Gary Shail from Metal Mickey and Richard Rowbotham from The Grimleys – on a trippy microbudget horse opera. Ostensibly based on a Mark Twain short story, there’s not a great deal of story here. But westerns are not about narrative, they’re about a feeling, an essence: individuals rattling around in a space so large it shouldn’t exist, occasionally interacting in surprising, often violent, ways. Tom has caught the spirit of the western genre (or at least, its more existential side) brilliantly. Parts are talkie, the desert is a Welsh beach, accents are … variable … and the only horses are stock footage. But Day of the Stranger feels right. Like Sergio Corbucci took a day trip to Rhyl. It shouldn't work... but it does.
Posted by MJ Simpson at 22:21 No comments: