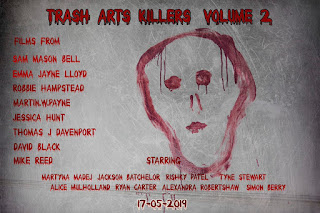 Nine shorts make up this 63-minute flatpack anthology, once again exploring the more experimental end of the scene, manifest in a tendency for minimal dialogue and copious monochrome. There are some interesting ideas on show but they’re frustratingly under-explored, especially Martin W Payne’s gory game of strip-chess Mate. Stretched to ten minutes this could have been agonisingly tense, but here it’s over before it’s begun: a great idea, well executed, going nowhere. Robbie Hampstead’s Final Demand is also a one-gag horror comedy, but it’s a funny one. Thomas J Davenport’s Sad Dad shows promise in its story of a father feeding his zombie son but it just stops with no real pay-off. Probably the most successful clip is kinky scifi comedy Sex Robot from token Aussie David Black. Other film-makers present are Emma Jane Lloyd, Jessica Hunt, Gant Murphy, Britmic and the ubiquitous Bell. There are proper credits for all films at the end.
Posted by MJ Simpson at 19:36 No comments: