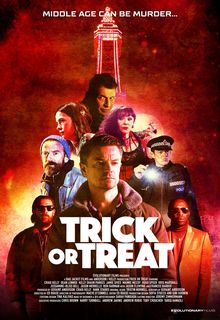 Trick or Treat has a limited theatrical release on 25th October 2019 in cinemas in northwest England.
Posted by MJ Simpson at 23:46 No comments: 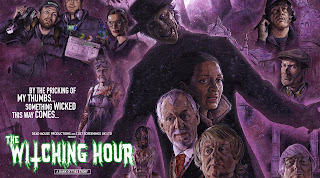 The fourth Dark Ditties film is the longest and in some ways the most conventional, although it becomes more complex as one considers connections to the other three. A cheesy paranormal investigation TV show films an episode in the same stately home where The Offer took place. On the verge of cancellation, psychic Marvin La’Fantome and cynical Selwyn Parsons have one last chance to recover their ratings – but a real supernatural danger lurks in the shadows for cast and crew. As ever, Morris and Smart’s script creates a set of unpleasant but fascinating characters, brought to life by an exemplary cast, both stock players and newcomers. Magnificent photography by Terrence Wilkins and Ben Halford, a beautiful score by American composer Sean Schafer Hennessy and of course Stuart Conran’s top-notch effects are all part of the hugely enjoyable Dark Ditties brand. Two further titles, Dad and Welcome to Upton, are promised for 2020.
Posted by MJ Simpson at 11:33 No comments: 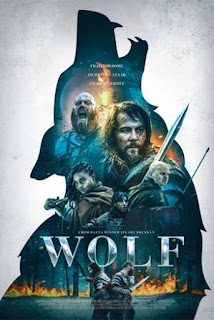 A few words about the future

For more than two decades now I’ve been patiently documenting the British Horror Revival. What started out as an interesting collection of distinctively social realist horror films has blossomed and expanded and kept on expanding. So that the comparatively short period covered by my post-2000 British horror masterlist now accounts for about 80% of all UK horror films ever made.

This is insane, clearly. It’s like letting other people write about the Premier League while I write about every other football club in Britain, right down to Sunday morning amateur teams.

I have already written one book, Urban Terrors, covering the British Horror Revival from its late 1990s origins up to the singularity of Mum and Dad, the first UK film released simultaneously in cinemas, on DVD and on VOD. Over the next few years I will be publishing my magnum opus: a complete catalogue of every British horror movie 2000-2019. About 1,050 films spread over three volumes, with a fourth collecting together 300+ incomplete/unreleased features.

I’m ten films away from completing Volume 1 (Volumes 2 and 3 are also mostly complete). I expect to produce that next year. Presumably self-published, unless anyone wants to make me an offer.

Here’s the thing. I really don’t want to keep on doing this for another ten years. I’m 51 now. I have other half-written books I want to finish before I die. I have other films I want to watch.

My masterlist will close for good on 31 December 2019. Obviously I will still be discovering films and releases which precede that date for many months to come, filling in gaps and revising data. But any film released on 1 January 2020 or later is outside my remit. I want my life back.

This is where you come in. I’ve spent all this time cataloguing and reviewing these films because Somebody Had To Do It. Unless someone takes the trouble to document these films when they appear, they will be lost to researchers forever. (You can’t rely on the IMDB. Plenty of the films on my list aren’t on the IMDB and many others have incorrect data.)

So this is an open invitation. If anyone wants to take up the mantle of British horror film historian for the next decade, you are very, very welcome. The post is about to become vacant and I would love to see it filled.

It would be up to you what criteria you establish for inclusion on your masterlist; I’m not going to prescribe anything like that. But I will say that this is a big job which requires constant prowling and digging around all corners of the web. You can’t just set up an alert and wait for things to come to you. These films can get released in any medium in any territory. This is a job for someone obsessive who loves looking for stuff and eventually finding it. It can be tedious, but it can also be very rewarding.

Perhaps a group of you want to do this. Perhaps two or more people will take on the gig separately and compete to see who can unearth the information first. I really don’t mind. It’s not up to me. I can give you nothing but my blessing.

But I do hope that someone will take on this mantle. Because otherwise, the recorded history of British horror cinema, from the silent era through the golden age of Hammer and Amicus, and then into the boom years of the early 21st century will suddenly lurch to a halt in 2020. Film historians of the future will have an impossible job trying to find this stuff if no-one records it at the time. What they’ll be left with is an unrepresentative handful of high-profile releases that won’t in any way reflect the actual state of the genre.