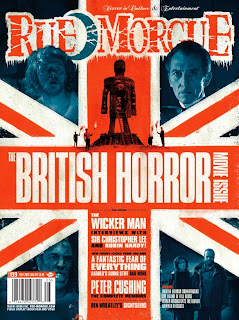 The next issue of Rue Morgue magazine is a subtly branded British Horror Special. And while most of the contents is predictably about old horror topics, including The Wicker Man and Peter Cushing, there is evidently some BHR coverage in there including Harold's Going Stiff, Sightseers and, slightly bizarrely, Simon Pegg-starring flop A Fantastic Fear of Everything.

The irony is that Rue Morgue generally hates British horror.

When I was researching and writing Urban Terrors: New British Horror Cinema, most of the reviews I found in Rue Morgue were extraordinarily negative. According to the mag's warped view of modern British horror, apparently, Dog Soldiers "plays dead with the best of them", Doctor Sleep has a "pedestrian idea of scariness", The Zombie Diaries is "inconsistent", Evil Aliens is "an abortion of piss-poor CGI, outlandish 'acting' and imaginative yet crappy effects", Nature Morte is a "formulaic police procedural" and a "lame-ass murder mystery", The Devil's Chair is "straight-to-video calibre nonsense", The Devil's Tattoo is "a shipwreck of a movie" (to be fair, it is) and - most point-missingly of all - 28 Days Later is "a colossal wankfest from start to finish, easily one of the biggest disappointments of the calendar year"!

Rue Morgue, which is generally an okay magazine, despite their antipathy towards British films, is available in the UK from the fine folk at Hemlock Books. This issue is published on 1st May.
Posted by MJ Simpson at 20:24 No comments:

Here's an interesting interview with Kim Newman, ostensibly about old British horror films but with some discussion of the British Horror Revival too.

BHR titles which he mentions include Eden Lake, Harold's Going Stiff, Long Time Dead, Nine Lives, Mum and Dad, Cockneys vs Zombies and The Devil's Business.
Posted by MJ Simpson at 20:03 No comments:

Derby Quad is staging a new film festival next month called iD Fest ("celebrating identity through film") and among the programme is a discussion panel with four leading lights of the British Horror Revival. It is being billed as 'Directing Independent British Features' but all four panelists have solid horror cred (though some have done non-horror too).


The panel is at 4.00pm on Saturday 11th May, tickets are four quid a pop. Find out more at www.idfest.co.uk
Posted by MJ Simpson at 08:30 No comments: 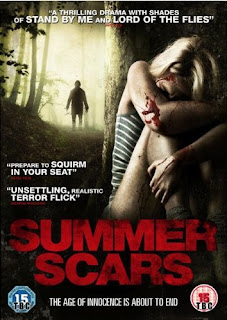