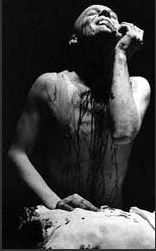 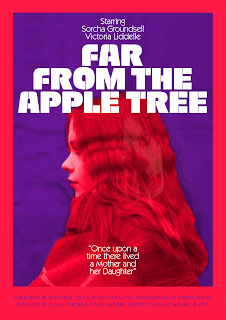 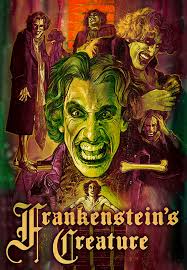 The first British Frankenstein film for 45 years (TV movies and US co-productions notwithstanding) is an extraordinary avant-garde piece of filmed theatre. Swanton (Double Date) debuted his one-man adaptation of Shelley’s novel in 2015, telling the well-worn tale entirely from the Creature’s viewpoint. Film journo Ashurst shot this in 2018 as a single take – static, wide shot, monochrome – yet this is much more than just a camera pointed at an actor. Swanton performs his 90-minute monologue in an alcove of an old church, his only props some clothes and a wooden chest, his face pancaked like Conrad Veidt in The Man Who Laughs, his theatricality and voice just this side of Donald Wolfit. Sometimes he approaches the camera and addresses us directly, sometimes he is still for over a minute, sometimes Ashurst overlays images of Icelandic wilderness or close-ups of Swanton. Mesmerising and utterly brilliant, this premiered at the 2018 Frightfest. Lawrie Brewster released a limited run of 200 DVDs. You do need to be reasonably familiar with the novel and not (like the bozo who reviewed this for Variety) just have seen a couple of Frankenstein films.
Posted by MJ Simpson at 17:19 No comments:

I know you love to keep up to date with Richard Driscoll news, so here’s the latest. 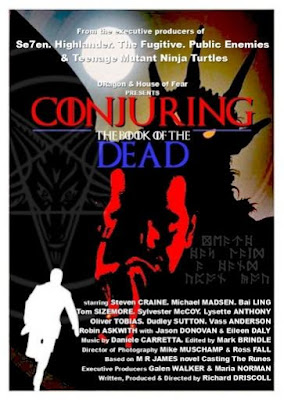 For some time now Driscoll has been talking of making an MR James adaptation, a remake of Night/Curse of the Demon. It looks like he might finally manage that as he has teamed up with a New York company called Monarch Films for his next movie, Conjuring: (The) Book of the Dead.

I say “next” but obviously this is mostly footage that was shot years ago for the putative sequel(s) to Evil Calls. All the usual suspects are present in the cast list: Craine, Madsen, Ling, McCoy, Anthony, Sizemore, Tobias, Sutton, Anderson, Donovan, Daly and The Ask. However Driscoll has also shot some new footage, down in Cornwall, featuring an actor named Laura Frances-Martin.

The film is “based on M R James novel Casting The Runes” although of course 'Casting the Runes' is actually a short story. Not that it matters because, since this is mostly existing footage, it probably has minimal connection with MR James. In fact, Conjuring: (The) Book of the Dead features the Necronomicon, which would seem to make it the first ever MR James adaptation based on the work of HP Lovecraft. 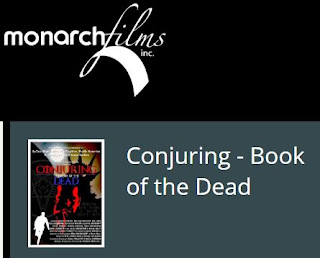 Synopsis: “A vivid horror epic about a writer of graphic novels who is given the task of writing a biography on the foremost occultist Aleister Crowley. Things start to go wrong when he discovers a rune inserted in Crowley’s diary.”

Having abandoned his less-than-successful crowdfunding attempts, Driscoll has secured some investors to finance post-production, a couple of folks named Maria Norman and Galen Walker who have had their small fingers in some deep pies over the years. This lets Driscoll proudly boast that his new film is “from the executive producers of Se7en, Highlander, The Fugitive, Public Enemies and Teenage Mutant Ninja Turtles”.

Monarch Films are a distributor who mostly schlep low-level B-movies and, oddly, space exploration documentaries (always cheap to make as all NASA footage is automatically public domain). In October, they uploaded a trailer to Vimeo, ready to flog this at the AFM.

And then last month Driscoll uploaded a different trailer (shorter, some different clips, clearer dialogue and without all the nudity) to his own Vimeo channel. I can't embed this (because of the Vimeo settings) but I can link to it...

What I particularly love about this second trailer is dear old Dudley Sutton mispronouncing ‘Necronomicon’. No reflection on Sutton (a fine actor, sadly missed) but it says something that Richard Driscoll not only used that take, he has actually put it in his trailer.

The only other video on Driscoll’s Vimeo channel, incidentally, is an animated explanation of a way of (legally) claiming back tax on investments in small companies, which someone made in 2013 and which has now been topped and tailed with the logo of his company DRagon Films. So it’s not just a film about tax avoidance, it’s somebody else’s film about tax avoidance which Driscoll is passing off as his own!

Monarch’s catalogue of available films also includes The Legend of Harrow Woods, Kannibal (as Headhunter 3D), Grindhouse Nightmares (under its original title of Grindhouse 2wo), Assassin’s Revenge (as The Assassinator) and Eldorado, in its 90-minute cut, as A Bad Day in Death Valley. 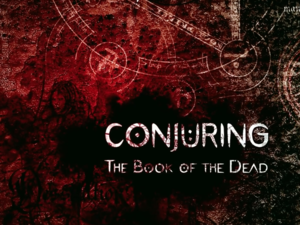 Speaking of which, that film is now available on Amazon Prime and other platforms as Hangover in Death Valley, credited to Driscoll's occasional directorial pseudonym 'Gideon Quin'. Blimey, it’s got more titles than a Jess Franco feature.

I will keep my eye out and let you all know if/when Conjuring: (The) Book of the Dead (or any other new Driscoll product) appears.
Posted by MJ Simpson at 19:21 1 comment: 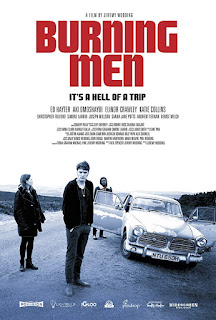 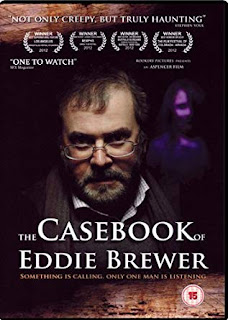 Comparable to Ghostwatch in both theme and quality, Spencer’s second feature is one of the great British screen hauntings, anchored on a superlative performance by Brooker. Eddie Brewer is an old-school paranormal researcher, keen to find evidence but careful and cynical. A TV documentary crew follow him but this isn’t found footage, simply incorporating some TV footage into the main narrative. He’s investigating a little girl with an invisible friend and spooky activities in an old Council-owned building: two cases which eventually overlap. Eddie’s antagonistic relationships with the film crew, a sceptical academic and other ghost-hunters meld perfectly with the growing supernatural ambience which builds to a genuinely frightening conclusion. Starting life as a ten-minute short in 2001, Casebook was conceived as TV series then became a feature, eventually re-envisioned for TV in 2019. Filmed in Birmingham from November 2010 to January 2011, it premiered at a local festival in March 2012. Essential viewing.
Posted by MJ Simpson at 12:09 No comments: