The Ghosts of Borley Rectory 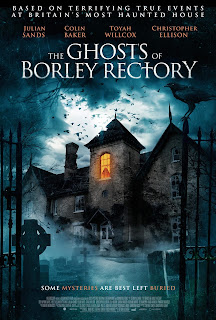 The Haunting of Borley Rectory was one of the most successful DTV features of the 2010s so it was only natural that Steven M Smith would return to ‘the most haunted house in England’ for this unrelated prequel. The bigger budget is evident in a tighter script, less rushed production and name cast including Baker and Toyah (who have several British horror credits apiece), The Bill’s Ellison, and Sands who is a veritable Borley regular, having narrated Ashley Thorpe’s animated dramadoc. The strong cast orbits around Wynn-Davies (Dogged, Nefarious), marvellously dynamic as Harry Price. The prolific Smith (15 horror features in as many years, plus several hooligan films) teams here with another key figure in the British horror boom, Louisa Warren (only 14 features but all in the last 3-4 years!) for what should be another big hit. Adroit direction of scare scenes creates a genuinely spooky and gripping feature that demonstrates how far Smith has come since his early work.