Films that sneaked out when no-one was watching no.2: Dark Night 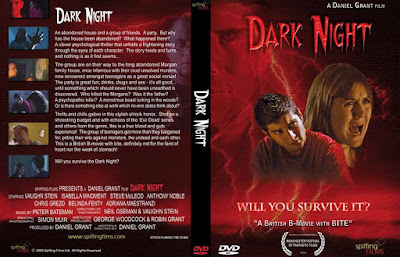 Barely had I recovered from my surprise that Demon had been released after three years in limbo, than I found an even bigger shock. Daniel Grant's feature Dark Night was first shown way back in 2006, when it had a few screenings and then... it disappeared.

In July this year, after nearly a decade in limbo, Grant was finally able to make Dark Night available... via BitTorrent. I don't fully understand what that means, but it's further evidence, if any were needed, that 'cinema' as we know it is a dinosaur and that every distribution channel is as valid as any other.

Apparently it costs $5.00/£3.20 and you get 'extras' including character artwork and a poster.

Synopsis: Thrills and chills galore in this stylish shlock horror. Shot on a shoestring budget and with echoes of 'The Evil Dead' series and others from the genre, this is a true blood and guts experience! The group of teenagers get more than they bargained for at the abandoned house, pitting their wits against monsters, the undead and each other This is a British B-movie with big bite, definitely not for the faint of heart nor the weak of stomach! Will you survive the dark night?

It just goes to show that everything turns up eventually if you wait long enough.
Posted by MJ Simpson at 22:12