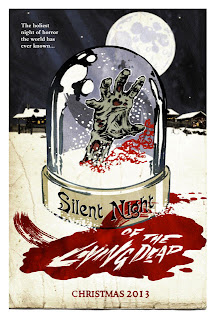 Shock Till You Drop reports that FX legend and occasional actor Tom Savini has been cast in Silent Night of the Living Dead, the Christmas zombie film currently being developed by director Paul Davis (who made American Werewolf docu Beware the Moon) and Severance writer James Moran. Legendary poster artist Graham Humphreys has done this teaser poster for the project.

Savini's previous acting gig in this country was Johannes Roberts' Forest of the Damned which is not one of his greatest hits. STYD also reports that AJ Bowen (House of the Devil, Hatchett II) has signed up for Davis' film.

Another STYD report from a couple of weeks ago says that FX bloke Dave Elsey will be handling prosthetics. Elsey is also attached to something called Zombie Carnage and, if your stomach can take it, you can see that project's Elsey-designed zombie version of Craig Charles.

"Next year will also see the release of Davis' FAB Press book 666 Horror Movies to Die For: The Essential Guide To Screen Terror. He'll also be seen as the monster in The Otherside, starring Nick Moran (Lock Stock & Two Smoking Barrels), hitting the festival circuit in 2012."

I can't find any other reference anywhere to The Otherside (or a monster film with Nick Moran) and have no idea what that is.
Posted by MJ Simpson at 23:13