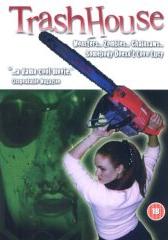 Pat Higgins (Mr ZCarsTheme himself) is a great guy and his films have steadily improved. I think The Devil's Music is magnificent and I can't wait to see the Higgins-scripted Strippers vs Werewolves.

But the downside of this is that I don't particularly rate his debut feature TrashHouse. It tries too hard to do too much with too little and ends up not working. I also must admit that, until browsing the web for background info for tonight's bit of writing, I had never thought of the film as a 'horror comedy'.

There's not a lot to say on the film but it's the starting point of an interesting and productive career.
Posted by MJ Simpson at 23:06