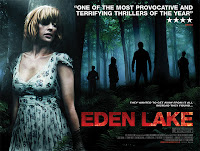 I put off watching this film because I really, really hate horror movies based around realistic violence but it's clearly a very important film as an example of both 'hoodie horror' and isolationist rural terror. Plus it confirmed James Watkins as a seriously good film-maker.

It's so upsetting that it took me two days to watch, in 5-10 minute chunks. But I'm glad I did see it because it's a magnificent achievement. Amazing performances, stunning 35mm cinematography, great score (by my old pal from the Hitchiker's Guide Fan Club, Dave Julyan) and absolutely spot-on script and direction.

Interesting footnote that won't make it into the book: the Asian kid is the actor who plays the brother's best friend in enjoyable kidcom Dani's House.
Posted by MJ Simpson at 17:39