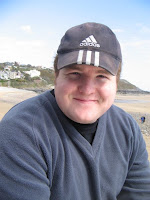 My mate Andrew Jones, who I've known since his directorial debut The Feral Generation, is currently producing a Welsh 're-imagining' of Night of the Living Dead. Andrew has very kindly answered some questions about NOLDR over on my main website. Here's a couple of extracts; you can read the complete, detailed, fascinating interview at MJSimpson.co.uk.

“Some fanboys have accused us of exploitation but that's what the film business is! Every film made happens because the producers or studios feel they can make money out of exploiting a concept that appeals to a particular demographic. But where we differ from the studio remakes is we have the independent freedom to do something unique and different with the Night of the Living Dead concept. Just because we have a known title that's no excuse to make a shit film. We've worked hard to make sure we make a good movie that will please horror film fans, because ultimately we are horror fans ourselves.”

“What I've found interesting about some of the criticism on message boards is that people point out that this film is low budget like that's a bad thing. It's amusing to hear that because those same fans complain about how studios remake the horror classics with big budgets and as a result the remakes have none of the gritty charm or soul of the original films. Every great horror film I've ever loved, without exception, has been a low budget affair. The original Night of the Living Dead, Last House on the Left, Halloween, Friday the 13th, The Hills Have Eyes. There's something about the stripped down, gritty quality of low budget horror that makes it a far more visceral and frightening experience than the glossy studio movies. As a horror fan I long for the return of the quality low budget horror that we saw in the 70s and 80s, so as a producer I want to make horror films that try to recapture the vibe of that wonderful era.”
Posted by MJ Simpson at 10:22