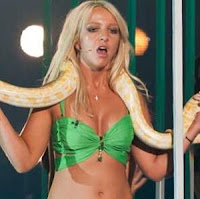 Confusion reigns over possible theatrical screenings of Eldorado. Richard Driscoll is sure that there will be a screening at the Prince Charles Cinema on Monday 30th January with various cast and crew in attendance. However, no details of this have been released on www.eldorado3d.com and there’s no mention of it yet on the PCC website.

The names being bandied about are Michael Madsen (if he’s out of the Big Brother house by then), professional Johnny Depp lookalike Danny Lopez and professional Britney Spears lookalike Lorna Bliss (pictured). However, it seems that not everythng being announced has been agreed to...

Last Sunday, the Eldorado Twitter/Facebook account said “Lorna Bliss and Danny Lopez to perform "Your The One That I Want" with ex-members of Paul McCartney's band WINGS at the after show party in Bournemouth at Mr Kyps”

To which Ms Bliss responded: “BULLSHIT ALERT http://fb.me/1jxfHqV0L THERE IS NO F**CKING WAY I WOULD AGREE TO THAT - EVER !”

Yesterday’s post said “Its officia Lorna bliss one of the stars of Eldorado and the world's best Britney Spears impersonator has agreed to sing some of Britney Spears songs at the Bournemouth Eldorado Special screening Party. Tickets available soon at www.eldorado3D.com Not to be missed.”

Which prompted this tweet from Lorna: “How can something be 'official' if I haven't actually agreed to it ? Takes the P**S !” and, after someone on Facebook suggested it would be “good for a laugh”, Lorna commented “I for one will be giving it a miss so I guess you won't be laughing afterall”

There’s nothing about an after-screening event on the Mr Kyps website. As for the PCC, any screening on 30th January will need to be either very early or very late as they’re showing Robin Hood: Men in Tights at 6.30pm and The Princess Bride at 8.45pm.

It's also worth noting that, with two weeks to go until its release date, Eldorado has still not yet received a BBFC certificate.

ETA: The Prince Charles have now confirmed to me that they have been booked for that date by Eldorado but that all tickets etc are being handled by Driscoll's people.
Posted by MJ Simpson at 15:04