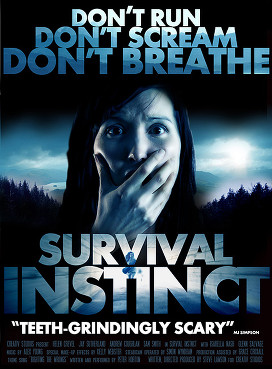 Steve Lawson has three new horror features lined up for DVD release in the space of four months. And just to confuse matters, they’re coming out in the opposite order to how they were made.

First out of the starting blocks is Killer/Saurus, Steve’s brand new movie about a genetically engineered dinosaur, which 88 Films has lined up for a 6th July release in the UK.

All three films are now up for pre-order on Amazon:


Before then, you can catch Survival Instinct on the big screen when it receives its festival premiere as part of the Fantastiq Festival at Derby Quad this Friday, 8th May. Steve and some of the cast will be in attendance for a Q&A.

You can find out more about Steve's work at www.creativ-studios.com
Posted by MJ Simpson at 18:35