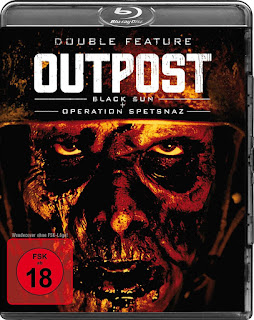 Those Germans can't get enough of undead Nazi zombie-ghosts, it seems. Here's a double bill of Outpost 2 and Outpost 3 which is set for release auf Deutschland on 31st July on both DVD and blu-ray.

Splendidfilm is the distributor, I don't know whether they don't have the rights to the first Outpost or whether they just think it's not needed. Their marketing blurb, which makes reference to Dead Snow, Iron Sky and Frankenstein's Army, reckons:

"Outpost: Operation Spetsnaz once again proves that Nazi Zombies are currently absolutely a must!"
Posted by MJ Simpson at 21:56