Aaaaand… he’s back. Richard Driscoll’s latest completely original idea is ... Star Warriors (aka Star Warriors: Knights of the Fallen Empire). It is a “sci-fi/Horror film similar in style to Star Wars & Game of Thrones”. So it’s got swords in it, then. 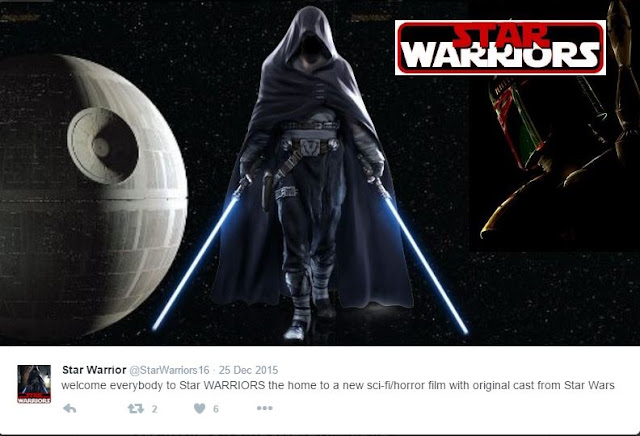 As we can see, he remains blithely unconcerned about major studio copyright. Death Star, check. Boba Fett, check. Who's that in the middle? Is it Kylo Ren?

And it has “original cast from Star Wars”. Which could mean almost anybody. There are hundreds of British bit-part actors who’ve been in one or more Star Wars films. Even Driscoll himself claims to have been an X-wing pilot in Return of the Jedi.

Right now there only seems to be this Twitter account which no doubt he will soon banish me from in the naïve belief that I won’t then be able to see everything he posts there. I’m not yet aware of a website, Facebook page or Indiegogo page.

It seems that Driscoll has teamed up for this (and Blade Hunter and something called Death Valley [Subsequently IDed as a retitle of Eldorado - MJS]) with an American firm called Indie SMS (Social Media Solutions). This is based in Wisconsin and run by an ex-pat Mancunian named Stuart Tanner. Tanner handled publicity for Landmine Goes Click, one of the big hits of last year’s Frightfest and set up his own company in November to handle social media for indie music and film. The question is: does he know Richard Driscoll’s background?

I for one am really excited about this and can’t wait to see Star Warriors. Seriously.
Posted by MJ Simpson at 08:19