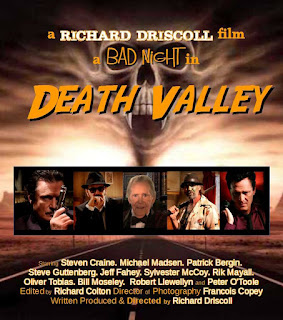 If you’ve never seen Richard Driscoll’s Eldorado/Highway to Hell, it looks like you might get another chance as Tricky Dicky is trying to sell the film again under a new title.

There’s no sign of an actual release yet but he has set up a Twitter account and a Facebook page for the movie as A Bad Night in Death Valley. Which, you know, isn’t a bad title as these things go.

The absence of David Carradine or Brigitte Nielsen from the credit block indicates that this is the 90-minute Highway to Hell version. Or possibly he’s re-edited it yet again. Who knows?
Posted by MJ Simpson at 08:06