Looking forward to... The Ghost Writer 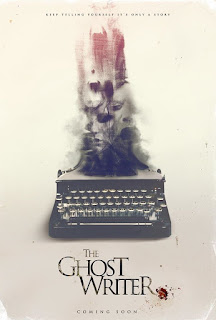 Synopsis: The Ghost Writer is the story of pulp novelist Gilliger Graham, who's about to be let go by his publisher unless he can deliver a bestseller - his last three titles have bombed. Gilliger reluctantly follows the advice of his agent and retreats to a remote cottage in the woods he inherited from his critically acclaimed novelist father, who died under mysterious circumstances at the cottage 10 years before. It's there that Gilliger makes a fresh and shocking discovery, one that will force him to confront not only his own demons but those of his father as well.

The film, which is party funded by an Indian production company, stars Luke Mably (28 Days Later, Spirit Trap, Exam) with  Brendan Patricks (Downton Abbey), Andrea Deck (The Devil’s Violinist), Robert Portal (Eat Local, The Rectory) and Matthew Jure (God’s Acre). Not to be confused with the Roman Polanski movie of the same title from a few years back.

Find out more on the film's Facebook page.
Posted by MJ Simpson at 20:13