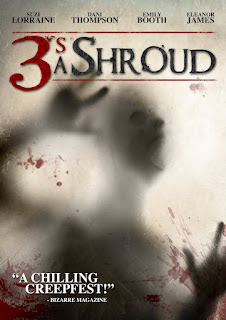 Back in December 2013 I reviewed low-budget anthology Three's a Shroud after viewing it at that year's British Horror Film Festival. Out of the blue, the film has now, finally, appeared on Amazon US, scheduled for a 29th September (Michaelmas!) release through Wild Eye Pictures.

Eleanor James actually retired from acting in 2012 but there are still numerous films of hers awaiting release, including WebKam, Chinese Burns and Eden Burning.
Posted by MJ Simpson at 18:57