Darren Flaxstone's Dark Vision, which I reviewed just over a year ago, is now available worldwide on a variety of distribution platforms that I don't understand. 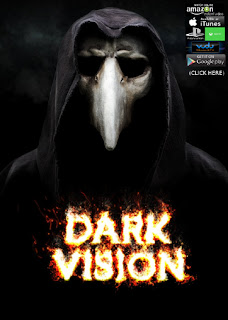 In ‘Dark Vision’ the fun indie horror from Bristol based Stray Spark Productions.

Written, directed and edited by Darren Flaxstone, co-written and starring Bernie Hodges, Dark Vision is a charming chiller, where gothic horror meets modern to create a whole load of hokum. This film has been described as a horror film for people who don’t like horror. It will make you laugh, jump and scream!

So what's it all about? Well there is more in the darkness than you know... Paranormal TV presenter Spencer Knights, (Bernie Hodges), puts his crew in peril whilst trying to win his own series as part of the paranormal competition Dark Vision. Find out what manifestations lay in wait for his team inside Baylock's Folly, a place with a dark history and possibly darker present. Who is its mysterious caretaker Clem, (Judith Haley), and what are the twisted motivations of the "Dark Vision Hub"?

Messer's Flaxstone & Hodges present their own brand of fun horror, which they hope will intrigue, scare, but above all entertain. There are some fantastic performances from the female characters. Suzie Latham plays feisty camerawoman Jo alongside Alicia Ancel as glamorous ex-soap star Marva Clewes. There is also a supremely creepy performance from Judith Haley as caretaker Clem. Oliver Park takes the role of hunky geek Xan and talented director/actor Simon Pearce stars as naive camera operator Kev.

Dark Vision is currently available on Amazon Prime in the US
(http://amzn.to/1xSj7JR) and Worldwide on iTunes, (https://itun.es/gb/3trv5),  Google Play, PlayStation, Xbox and Vudu.