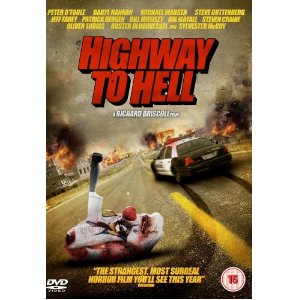 Richard Driscoll's Eldorado, which was only released in January, is being re-released with a new title on 23 July. It is now called Highway to Hell. Not to be confused with the 1991 film Highway to Hell, which also featured Patrick Bergin.

The previous release had a listed running time of 158 minutes which was actually a misprint for 1 hour and 58 minutes but Amazon lists the running time of Highway to Hell as 92 minutes. If true, this would mean 16 minutes of this incoherent nonsense has been removed, including presumably Brigitte Nielsen's scene as she is not listed on the sleeve. Or maybe Driscoll just gave up trying to spell her name right.

Product description (copied from Amazon):Is a story like no other as the Texas Chainsaw Massacre meets the wild west when two Las Vegas entertainers end up in the town of Eldorado. Watch Peter O'Toole (Lawrence of Arabia and The Last Emperor) Daryl Hannah (Bladerunner and Splash) guide you through this story as the horror engulfs our heroes. Will they be eaten alive by the town's occupants or will they manage to escape. With Michael Madsen (Reservoir Dogs, Kill Bill 1 & 2) giving chase as the local hoodlum. Steve Guttenberg (Three Men and a Baby, Police Academy) as the crooked manager along with Rik Mayall as the cannibal chef. Patrick Bergin, Sylvester McCoy, Robert Llewellyn, Jeff Fahey and Oliver Tobias. In this star studded story where blood drips and laughs are heard aloud in the most unusual horror film you will see this year. You'll die laughing..............

The blu-ray (but not the DVD) says 'In 3D' on its sleeve. According to Stereoscopy News, "Highway to Hell will be advertised on Channel 5 the week before its release and there will be a theatrical release at 6 cinemas around the UK. With a special screening through Scream Magazine attended by members of the cast and crew including the 3D Stereographer Phil Brown (3D Phil)."

Screenings were promised for the previous release and never materialised, so don't hold your breath.
Posted by MJ Simpson at 01:17