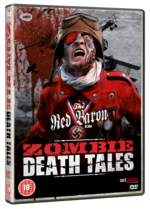 Personally, I don't think that's as good as the original title, partly because there are a million films called Zombie This or Zombie That, and partly because only one of the three stories is about zombies. Plus it takes away the distinctive aspect of the film - that these are all war stories - and aren't all zombie films 'death tales' by definition?

Safecracker have this pencilled in for a 13th August release.
Posted by MJ Simpson at 23:23