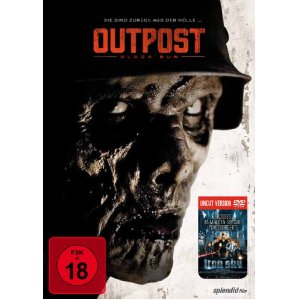 Outpost was a terrific 2008 Nazi-zombie film and the guys behind it have made two sequels. The second film, Outpost: Black Sun, hasn’t been released here yet, in fact it’s not even on pre-order. But if you’re desperate to see it and have 13 euros to spare, it’s out in Germany (which is kind of ironic, given the subject matter).

The Deutsch disc, which as released last month by a company called Splendid Film(!), has English and German audio options with German and Dutch subtitles. Here's the Amazon.de page.

Meanwhile, the third film, Outpost: Rise of the Spetsnaz(?), is now in post.
Posted by MJ Simpson at 08:14