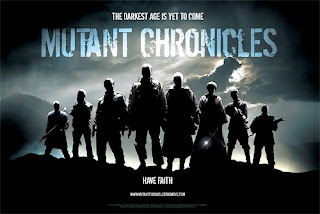 This was always going to be a tough one to write because Simon Hunter is a mate. He invited me onto the Chronicles set to do a bunch of interviews, was very appreciative of everything I did to try and promote the film when it was released in 2008, he even said that Alan Jones and I were the only two journos he really wanted on his next feature.

But... I have to be honest in the book and Mutant Chronicles is pretty awful. Not through any problem with the direction: I think it's well-directed, well-produced, well-designed and the acting... well, some of that's good and some of it is John Malkovich. But the script (by Event Horizon's Philip Eisner) is just awful, with paper-thin characters, clunky dialogue and absolutely fundamental plot-holes, not least that a world bristling with heavy artillery, armoured vehicles and flying machines is unable to defend itself against what is effectively a bunch of angry gorillas with swords.

Mutant Chronicles was actually part of the reason I gave up journalism. It costs quite a lot to get from Leicester to Shepperton and, while I didn't expect to use the interviews for two years because of the lengthy post-schedule, I did expect to make a profit by selling them. But the film was released with about two weeks' notice so there was no opportunity to place anything. That fed into my disillusionment with the whole thing, plus mags were closing left, right and centre.

Ironically, as soon as I gave up the journalism to concentrate on books and scripts, there was a boom in UK indie horror production and a whole bunch of new mags launched. C'est la vie.

You can read all my on-set interviews in the 'Mutant Chronicles Chronicles' section of my main site.
Posted by MJ Simpson at 08:32