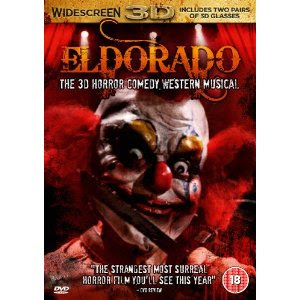 I honestly don’t know whether the announced release of Eldorado in January will go ahead. Richard Driscoll obviously thinks it will but other ‘interested parties’ assure me that Driscoll does not own the rights and any such release would be illegal. There's talk of 'cease and desist' orders. I’ve placed a pre-order with Amazon just in case!

This is the DVD sleeve. For some reason (possibly contractual) it completely fails to mention or depict any of the star names and instead shows Michael Barber (who was a regular background artist in Ashes for Ashes) wearing a clown mask. Despite the ‘18’ certificate, the film has not yet been through the BBFC.

What is really exciting however is the launch a few days ago of a website at www.eldorado3d.com which has a bunch of video interviews containing lots of clips from the film, plus stacks of stills. The ‘trailers’ all seem to be basically the same thing with a different star at the end, and the ‘virals’ are a rather awful series of videos in which professional Johnny Depp impersonator Danny Lopez does a surprisingly bad Captain Jack Sparrow impression. There’s even a Twitter thing so you can keep up to date with stuff.

Among the things I’ve learned are: all the songs were recorded by local club/session singers and then (rather obviously) mimed by the stars; the David Carradine footage was lifted from another of his ‘last films’; there was a week or so of location work in Las Vegas and the Nevada desert; and Daryl Hannah shot all her scenes in LA.

The Twitter/Facebook news feed reckons that Dan Aykroyd and the Belushi estate have sanctioned the use of the Blues Brothers characters. Here’s the most recent news: “Eldorado 3D may only be the first of many spin off Blues Brothers films to feature the Jews Brothers from Eldorado 3D after the reaction from distributors around the world. Lead actor Steven Craine and film director Richard Driscoll are currently in negotiations.” Like any announcement from Richard Driscoll, this should be taken with a big pinch of salt. (Craine and Driscoll are, of course, the same person.)

If this release goes ahead then presumably Grindhouse 2wo will use only spare footage from the Eldorado shoot. Unless Driscoll is preparing it as some sort of contingency plan. Interestingly, some sites list Rebecca Lynley among the Grindhouse 2wo cast - she was the original female lead in Eldorado but left the production after shooting started for reasons that are unclear. I wonder if she - or any of the named cast - know they’re in a film called Grindhouse 2wo...

Also of note is this planned re-release of the Driscoll-produced Dennis Nilson biopic Cold Light of Day which spelled Nilson’s name correctly when Screen Edge released it on VHS in the late 1990s but now claims to be “Based on the true story of Denis Nielson”!
Posted by MJ Simpson at 13:51