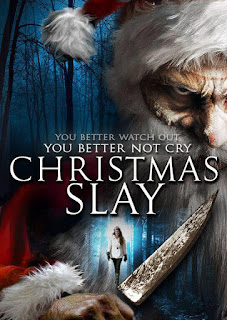 It wouldn't be Christmas without a film about a psycho in a Santa outfit attacking hot women in an isolated cabin, would it? So it's a joy to report that new indie British horror Christmas Slay is now available for your viewing pleasure on Amazon Prime.

Synopsis: The story of CHRISTMAS SLAY begins on a wintery Christmas Eve in the picturesque Kentish countryside, the horrific murder of a loving family, and the capture of a Santa Claus obsessed blood thirsty killer.
As Christmas dawns closer the following year, a group of collage girlfriends decide to get away from it all and relax and party over the Christmas holiday, they decide to escape to the idyllic Mistletoe Lodge nestled within the beautiful snowy mountains of the Scottish Highlands, but what starts off as the perfect festive getaway of fun in the snow and a glass of eggnog or two, suddenly descends in to gruesome blood bath of terror, and a fight for survival.

No sign of a DVD yet. This is the 74th British horror film released this year. Crikey!

You can find out more at www.facebook.com/christmasslaymovie
Posted by MJ Simpson at 20:19