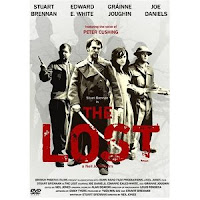 It is ironic that Stuart Brennan's eagerly awaited Zombies of the Night was never released - because Brennan viewed it as an experiment, a way to hone and develop his film-making skills - whereas his first effort The Innocent did get a release (through Brain Damage). Neither the image nor the sound is clear enough to make out what is going on and other than the fact that it involves child ghosts, I couldn't even begin to guess at the plot (or the characters' names).

Brennan's second film The Lost is better technically and artistically but wa-a-ay too long, even at the cut-down 55-minute version that I watched. Its sole point of interest is the presence of the late Peter Cushing in the cast list because it uses a recording of him reading a poem.
Posted by MJ Simpson at 11:02