Would you believe: Richard Driscoll's 'The Devil Rides Out'?

No connection with Hammer or Dennis Wheatley, thank the Lord. Driscoll has sent Dread Central a bunch of stills from a 'new' film called The Devil Rides Out, plus a synopsis. Check them out. As so many sites are wont to do, Dread Central has simply accepted this stuff without question and posted it on their site (a couple of weeks ago) verbatim. But with Driscoll, a little digging is always in order. 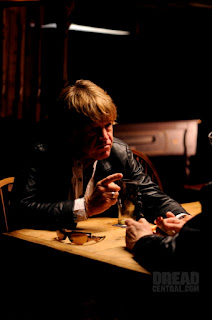 As you might expect, this is not a 'new' film, this is The Devil's Disciple, which was shot down at the House of Fear Studios in Cornwall way back in 2006. This was originally intended to be a sequel to Evil Calls (shot as Alone in the Dark and now available as The Legend of Harrow Woods). The third part of The Raven trilogy was going to be called Back to Hell.

Here is the synopsis for Back to Hell, from June 2007:
“The film picks up from where Alone In The Dark left off, with the story of George Carney and how he discovered the secrets of Harrow Woods through the diary of the notorious occultist Aleister Crowley. As Carney investigates the connection between the forest in Harrow Woods and the black magician, he delves head first into a world of black magic as he travels to New Orleans from New York where Crowley’s daughter now lives. Followed by occultists and murderers Carney embarks on finding the truth about the diary as he learns that Crowley intended to bring the witch Lenore back to life.”

Some extra footage was shot in 2008, based on the Back to Hell script, and combined with the Devil's Disciple footage to make something called Back2Hell. As I point out in my forthcoming book, this makes The Raven, uniquely, a two-film trilogy. (Only Driscoll...)

Further pick-ups were shot in February 2010, although it's unlikely Driscoll has shot anything recently as he has sold his farm (and I hear rumours about legal matters, though nothing clear or definite).

Let's not hold our breath for The Devil Rides Out, just as we are not holding it for Grindhouse 2wo. But these stills are new. All I've seen previously was a shot of Kenny Baker who was in the 2006 footage but presumably isn't in this version.

A comment by Ramsey Campbell in his Video Watchdog review of The Legend of Harrow Woods seems appropriate here: "Part of the fun is watching Driscoll struggle to reconcile the movie with his latest ideas for it, and who knows whether that’s over, even now?'
Posted by MJ Simpson at 08:21