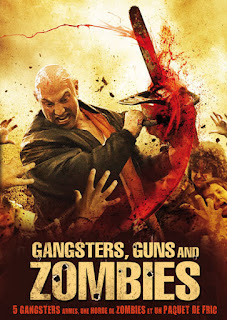 With one week to go until this year's Day of the Undead zombie-bash here in Leicester, the 'mystery film' has been revealed, and damn me if it isn't yet another British tile. A week tomorrow Phoenix will be screening the UK premiere of Gangsters, Guns and Zombies, directed by Matt Mitchell.

With Before Dawn, The Eschatrilogy and Cockneys vs Zombies, that's a solid six hours or so of new British horror goodness (with a slice of Charlie Higson in the middle). I should be there for all four, and will be plugging my new book to anyone who will listen. In fact, I'm off round Zombie Ed's house tomorrow to drop off some Urban Terrors fliers.

GGZ will be released on VOD this Thursday and hits US DVD on 11th December. Although it seems it's actually already available in France, where the DVD was released last month.
Posted by MJ Simpson at 23:49