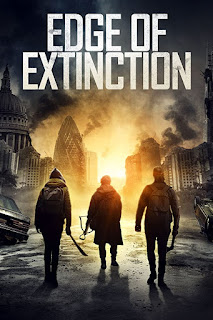 Nasty, brutish and, well, 141 minutes long, this impressive second feature from the team behind The Dead Inside is a bleakly nihilist, bloodily violent post-apocalyptic tale where no character has any real moral integrity. Two men with no reason to trust each other rescue a female mutual comrade from an organised gang of cannibal psycho rapists, then face down their enemy with the help of a couple living in an isolated eco-home. There are many more layers of betrayal and brutality than that precis implies. It all happens a few years after a global war reduced society to individuals and groups eking out a desperate existence, making this a sort of miserabilist British Mad Max. Childhood flashbacks give us some clues, though it’s never explained why no-one has a gun (which would have changed the plot significantly!). Shot (as The Brink) weekends in 2017/18 in Beds and Bucks, with terrific use of derelict locations. Mycho’s Anna and MJ Dixon were associate producers (and are among the extras), repaying Hundy and Gilbert’s contribution as co-producers on Mask of Thorn. Brit horror regular Rudy Barrow has a small role but doesn’t last long.
Posted by MJ Simpson at 15:58