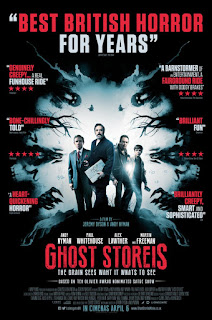 Ghost Stories was a popular success based on a name cast, the reputation of Dyson and Nyman’s West End play, and a massive marketing budget. When finally watched however, it’s an embarrassing disappointment: a swirling morass of clichés and jump scares belaboured with a staggeringly terrible score and topped by the most underwhelming, unimaginative ‘twist’ since The Others. Touted as an Amicus-style anthology, it’s nothing of the sort. Nyman (co-writer of much of Derren Brown’s work) plays Goodman, a professional sceptic challenged to solve three ‘unexplainable’ cases (by a heavily made up actor we’re not supposed to recognise). He interviews three people and we see their stories as flashback vignettes, but since there’s no material evidence to any of them there’s nothing unexplainable. The last act goes off on a tangent about Goodman’s own childhood traumas before ‘explaining’ everything (or rather, showing nothing needs explaining) with a revelation that is at least 98 years old. Shot in Yorkshire, it premiered at the London Film Festival in October 2017. Sigh.
Posted by MJ Simpson at 21:54