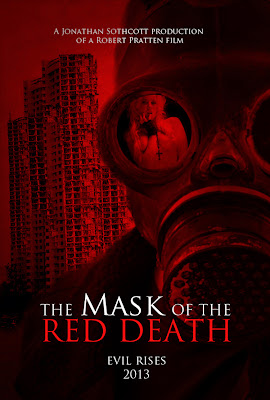 The only thing better than really cool people working together is really cool people I know working together. So it's great news that my pal (everybody's pal) Jonathan Sothcott, busy finishing off Elfie Hopkins and Strippers vs Werewolves, has announced a sci-fi version of Mask of the Red Death, to be directed by my old mate Robert Pratten, the man who brought us London Voodoo and Mindflesh.

"London. 2020 as the radioactive clouds begin to fade after a devastating nuclear war, the last dregs of humanity fight to survive – drought and famine cripple this cracked, broken world. Electricity is a thing of the past. Hideous mutants stalk the night, desperately searching for food and warmth. A cold planet.A dying planet. Superstition is rife. Evil rises. Through the husk of the once great metropolis stalks a lone figure, The Red Death: to some a God, to others a freedom fighter. To all a nightmare of agonising death.

From the shell of a once great building, all that remains of his empire, corrupt billionaire Marzo rules what is left of London. His kill squads murder, pillage and rape. His group of friends indulge in every excess. Yet neither money or power can save Marzo from the Red Death… and it is coming for him."

Mask of Red Death will be a transmedia project encompassing a feature film, mobile app, web videos and social media. All media and marketing for the project will be integrated with a new technology called Conducttr which allows audiences to take a participatory role in the storyworld. Although audiences can't affect the outcome of the movie - it plays like any other - they will be incentivised to collect items across the web and physical locations in order to have a heightened experience of the movie when it screens.

Sothcott, Head of Programming for the Horror Channel prior to his successful career as a film producer, said "I have been looking for a project to work on with Robert that was more than just a film. As a producer I am constantly looking for new ways to tell stories and transmedia represents a very exciting opportunity. This version of Poe's most famous story has everything the modern horror audience could want – its terrifying, sexy, action-packed and gory. As a film maker, Robert has a unique visual style that will make for an incredibly stylish film – this will be every bit as shocking as Mindflesh was and the post-apocalyptic setting allows us to give it a unique flavour – part steampunk, part cyber goth."

Pratten commented "When Jonathan mentioned the idea to me my mind first went to Tenpenny Tower in Fallout 3. It's not quite like that at all but it does give you the idea of a rich dude trying to protect himself from the inevitability of death after an apocalypse.

This is a great opportunity to show how society might look after a reboot from a damaged hard drive: there's a lot of what we recognize mashed up with medieval behavior we thought had been erased.In a world today in which many are predominantly hostile to spirituality, all they've done is replace faith in God with a faith in silicon chips and silicon breasts. In an post-apocalyptic Britain set in 2020, with life as we know irretrievably lost, new leaders will need to create myths in order to bring hope to the hopeless. And where there is no hope there'll be violence, drugs, superstition and lust driven by the fear of facing our own mortality."

The $1.5 million picture is scheduled to begin principal photography on June 1st 2012. No casting has been announced as yet.

Edgar Allan Poe's short story The Mask of the Red Death was first published in 1842 and has been filmed a number of times, most notably by Roger Corman in 1964 with a cast including Vincent Price and Hazel Court.
Posted by MJ Simpson at 18:10