The Blood Harvest coming to DVD in January 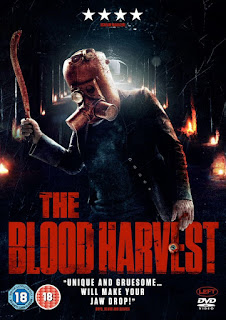 The latest feature from indefatigable Northern Irish film-maker George Clarke gets a DVD release next month through the always reliable Left Films. The Blood Harvest is Clarke's seventh film since his 2008 debut Battle of the Bone. It recently picked up awards for Best Actor and Best Effects at the Freak Show Horror Film Festival in Orlando.

Synopsis: When a spate of horrific murders take place in and around Belfast, Detective Chaplin believes it may not be a serial killer but the work of something supernatural. He is fired from the investigation, but, not one to give up easily, Chaplin works secretly, with his old partner Detective Hatcher, to try to bring an end to the killing, one way or another. But the closer Chaplin gets, the more he realises that something unexpected and very sinister is going on...

You can find out more about George Clarke's work at http://yellowfeverproductions.com

I have this week received a screener from Helen at Left Films. I will be adding reviews of both Battle of the Bone and The Blood Harvest to my main site shortly.