Films that sneaked out when no-one was looking: Within

Everything turns up eventually but sometimes it can take a long time to discover this. Within is a British horror feature that was shot in Prague a decade ago, trade screened at the Cannes Market in May 2005. Then it disappeared and for ten years it has been on my MIA list. Yesterday, while browsing around the web, I discovered to my amazement that Within had actually been released on DVD in Italy in November 2012. Or possibly March 2010. 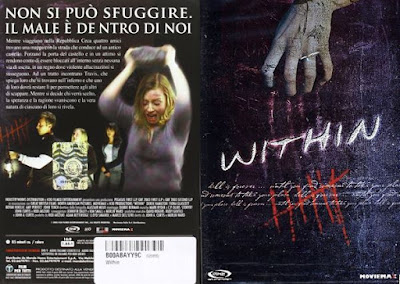 This prompted further digging. The IMDB gives alternative titles for the film in Spain and Brazil, listing both releases as 2007. I can find two different Brazilian sleeves, retitled O Escolhido (‘The Chosen’) but no confirmed dates, although there’s a user review from a Brazilian guy on the IMDB dated March 2007 so I’ll go with that. The Spanish release as Atrapados en el Infierno (‘Trapped in Hell’) was January 2008, according to Amazon.es.

This of course means that Within is yet another film that would have been included in Urban Terrors had I known. Maybe one day I’ll do an expanded and revised version. 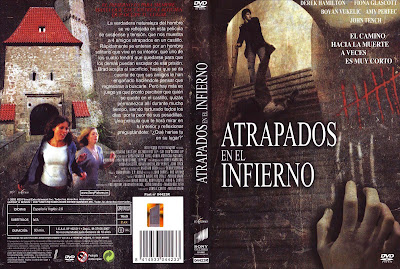 The film was jointly directed by Merlin Ward (Out of Bounds/Dead in the Water – another title that could be added to the second edition if it ever happens) and American producer John A Curtis (Xtro II, Laserhawk). The IMB lists it as a UK/Canada/Italy/Czech co-production but it looks British to me.

Here’s the synopsis: Brad, Christina, T.K. and Kelly are on a post-graduation trip to Europe. Unfortunately, what starts out as a dream quickly spirals into a nightmare. Upon entering a 14th century castle, the friends find themselves trapped in a horrifying alternate realm where violent hallucinations overtake them. A stranger emerges, shocking them with the reality of their terrifying fate; one must stay behind - alone forever within the torturous stone walls, in order for the rest of the group to escape. As time runs out, hope and reason disappear, anarchy takes over and extreme violence erupts. Will it be male strength or female guile that will ultimately determine who will bear the terrible fate?
Posted by MJ Simpson at 12:40