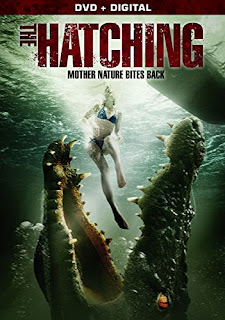 The Hatching, Michael Anderson's comedy-horror about a crocodile loose in Somerset, gets a US release on 15th March 2016 through Lions Gate Entertainment.

You can pre-order it now on Amazon.

I wrote about the film, which stars Andrew-Lee Potts, Laura Aikman and Thomas Turgoose, just over a year ago when it premiered at the Bath Film Festival.

I'm not convinced that the image on the DVD sleeve is an actual still from the film. Not too many places on the Somerset Levels have water that deep and clear...
Posted by MJ Simpson at 17:54