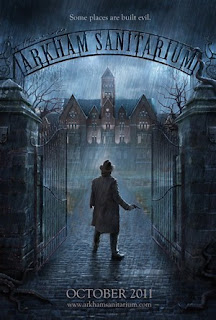 The world’s never going to be short of HP Lovecraft movies but very few get made in the UK. Andrew Morgan’s Arkham Sanitarium, which was filmed earlier this year, is an anthology of three HPL tales set in the 1930s with an original 1950s framing story. Release expected next year. Looking forward to this one.

About the film:
Arkham Sanitarium is an anthology of three short stories faithfully adapted from the works of H.P. Lovecraft – each of the three stories is set in 1930s New England (specifically Providence, Rhode Island and the fictional town of Arkham, Massachusetts). The stories are connected by an original ‘wraparound’ story. In this story – set in the 1950s – Alice Crow investigates the strange stories surrounding the infamous Arkham Sanitarium.

The Haunter of the Dark Robert Blake, author and artist returns to Providence to research a shadowy cult for his new book – against the warnings of his friend Ambrose Dexter he tracks down the old church where the cult performed their dark rituals – in the dusty, decrepit ruins he finds an ancient device that summons a monstrous creature intent on destroying him.


The Shunned House Phillip Whipple, a Miskatonic University medical student returns to Providence to help his uncle Elihu move house. Phillip finds his uncle’s notes on ‘The Shunned House’ – an old, crumbling place with a bad reputation. Phillip was trapped there once as a child and saw something he couldn’t explain so with his uncle’s assistance, the pair seek to uncover why an alarming number of people have died there.

The Thing on the Doorstep Edward Derby, a poet and fantasist, falls for Asenath, a cold but hypnotically beautiful student at Miskatonic University – the pair wed shortly after despite Edward’s close friend, Daniel Upton having concerns about the marriage. Daniel’s worries are well-founded - Asenath is the daughter of Ephraim Waite – an old man rumoured to be a practitioner of black magic before his recent death.

More info at http://survivorfilms.com
Posted by MJ Simpson at 21:52