Driscoll's 'Man Hunt' is half of a re-edited 'Eldorado' 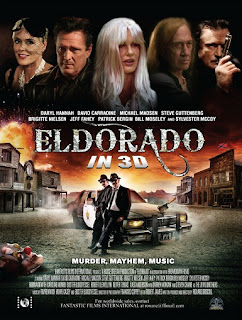 Oh this is priceless. More news on Richard Driscoll’s Man Hunt aka Grindhouse 2wo which I first mentioned last week. Here’s the blurb on Amazon, Lovefilm etc for the film which is listed as a 27th February release:

In the style of 70's grindhouse comes MAN HUNT and STRIPPER WITH A SHOTGUN in one exciting programme that is full of zombies, cannibals, Nazi's and bare breasted ladies. If you like your cinema raw with plenty of violence than GRINDHOUSE 2wo is not to be missed.

List of DVD extras:
Driscoll was filming scenes for this earlier this month - here’s a blog by make-up artist Emslie Mills about working on the film. But we can see from the cast list (and the fact that Steve Munro's CastingCallPro page lists his character name as the same) that what Driscoll is doing here is cobbling footage from his 3D Blues Brothers rip-off comedy-horror-musical-western Eldorado together with new stuff to make Grindhouse 2wo – just as he cobbled Alone in the Dark together with new footage to make Evil Calls, and just as he cobbled the unreleased The Devil’s Disciple together with new footage to make the (also) unreleased Back2Hell.

What is interesting is that, on her Facebook page and blog, Emslie refers to Eldorado (which she also worked on) and Grindhouse 2wo as if they are different films so presumably she (and other crew members) were unaware that they’re the same movie.

Also curious to see Linnea Quigley’s name there. Perhaps Driscoll is sticking some leftover footage from Kannibal in there.

Eldorado itself is listed on Amazon etc for a 30th January release. While it would be great to see this nonsense, I’m not holding my breath because there’s still a whole raft of legal/contractual stuff to sort out before this film can be legally released (if that ever happens). Although the various sites show an ‘18’ certificate, the film has still not been through the BBFC (though it has been submitted to the BVA). The existence of Grindhouse 2wo makes it even less likely that we (or the film's increasingly frustrated investors) will ever see Eldorado in its original format.

(Final point to note: there has never actually been Grindhouse 1ne in this country. For both cinema and DVD in the UK, Death Proof and Planet Terror were released separately.)