The Stone: No Soul Unturned (review) 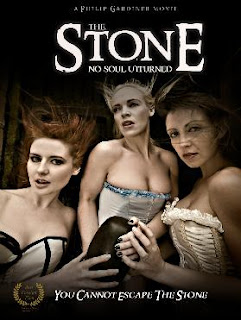 I have added to my main site a review of The Stone: No Soul Unturned, the debut feature by paranormal documentarian Philip Gardiner. It's a British feature shot in Nottinghamshire with a bit of US funding (Warren Croyle, head of Chemical Burn Entertainment who release Gardiner's various fiction and non-fiction titles, is an executive producer).

It's not as awful as I expected. Actually, it probably is, just in a different way. I expected the film to be some po-faced, overly serious polemic about how all this crap is real. It actually turns out to be a supernatural horror with somewhat middling technical credits, no discernible story and far too many drawn-out sequences of people just walking around. However the first half of the film does offer some unintentional entertainment (the second half might too, if it hadn't all been filmed way, way too dark).

The extraordinarily prolific Gardiner has followed this with Paranormal Haunting: The Curse of the Blue Moon Inn (also on my TBW pile), House of Sin, Cam Girl: The Movie, The Dark Watchers, Lady of the Dark: Genesis of the Serpent Vampire and One Hour to Die, all available from (or coming soon from) Chemical Burn.
Posted by MJ Simpson at 13:30