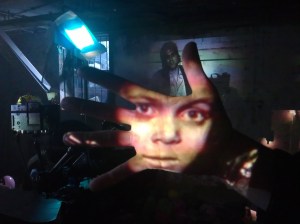 Scar Tissue wrapped a couple of weeks ago and has some impressive names on the list. Co-producer Tim Dennison’s name is usually enough to interest me just because he always seems to get attached to films I end up watching, including Lighthouse, Room 36, Evil Aliens and even (I discovered from the Scar Tissue website) line producing this year’s London-set Bollywood sci-fi epic Ra-One!

The producer is Michael Riley, who also made the brilliant Vampire Diary and, more recently, Danny Dyer in-car psycho-thriller Deviation which is due out in February. And the music is by Mark Ayres, a familiar name to Doctor Who fans. I think I only met Mark once but as it was in the old BBC Radiophonic Workshop studios and he showed me the original audio-reel of the original Who theme, it has sort of stuck in my memory!

Production designer John-Paul Frazer worked on forthcoming urban horror Comedown, forthcoming rural horror Hollow and the wonderful historical short My Name is Sarah Hayward. And the legendary Paul Hyett has done the prosthetics, which is recommendation in itself.

The cast includes Shaun Dingwall (second time I’ve mentioned him - he’s in The Forgotten), Kenneth ‘Admiral Piett’ Colley, Danny Horn, Pete Lee-Wilson and Chris Cowlin (who is in both May I Kill You and uwantme2killhim?). Writer-director Scott Michell’s last film was 1996 thriller The Innocent Sleep.

This is definitely one I’ll be watching out for.
Synopsis
Twenty-five years ago the serial killer Edward Jansen was shot and killed by the police in his underground lair. With him were the bodies of five young girls he had mercilessly tortured and killed.

And today is Luke Denham's birthday. Twenty-two years of a normal, unremarkable life.

But tomorrow Luke will wake up to find a mutilated corpse in his bathroom.

He will be stalked and taunted by a psychopath who died long before Luke was even born. And he will have his future placed into the hands of a volatile and deeply disturbed female detective, Sam Cross.

The secret they uncover will shatter Luke's whole world and bring Sam face to face with demons from her tragic childhood. Together they will discover that the past is impossible to escape. And that some wounds will never heal.

SCAR TISSUE - a powerful, gripping mystery-thriller. Shocking and unsettling, it asks some of the most difficult questions we can ask of ourselves. Can we ever truly know or trust another human being? Can we even know ourselves?
Posted by MJ Simpson at 23:16