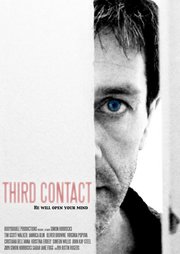 Third Contact, which had a preview screening on 3rd November, has been described as "an atmospheric psychological thriller exploring madness and depression and achieving a fresh take on the topical issue of euthanasia." It has been shot mostly in black and white and is pretty much a one-man effort by Simon Horrocks who wrote a short thriller in 2005 called Callback.

The cast includes Simeon Willis who was in StagKnight and the excellent zombie feature The Invisible Atomic Monsters from Mars.

Synopsis
Dr David Wright's emotional torment now prevents him from functioning as a therapist. The woman he has loved has vanished from his life 'forever'. Rene Maurer, one of his regular patients, has died - an apparent suicide. Rene's sister, Erika, travelling to London to sort out his things, discovers something curious - his apartment is almost empty. A cup, a spoon, a fork, a knife, frames without pictures, torn photos... One more curiousity - a list of memories. Four dated descriptions of moments in Rene's life.

Another patient dies. Another list of memories. There's something strange going on. Something sinister behind these 'suicides'...

Here's the trailer and a three-minute short explaining the concept of 'quantum suicide'. It all looks fascinating.