Warhouse is found, not missing! 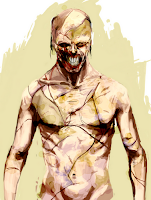 Here's one I hadn't heard of before: Warhouse. And it looks squaddie-tastic! As we all know, all the best British horror films have squaddies in them. Check out the great design artwork by Chris Wildgoose.

Warhouse is described as a "film about a soldier who is repeating the same day over and over working towards becoming one of a chosen few to fight a final battle" and "Gladiator meets Groundhog Day" although to me it sounds more like TrashHouse meets Deathwatch. It stars Joseph Morgan (The Vampire Diaries), Matt Ryan (Blood Monkey!) and William Troughton.

Synopsis
In the role of Royal Marine, A.J. Budd, Joseph Morgan stars in this brutal psychological and supernatural thriller, in which he finds himself trapped in the Warhouse. Imprisoned, he is forced to fight for his life against grotesque, inhuman opponents. He must kill every day or die himself. His one glimmer of hope comes in the form of a diary, left by a former occupant of the house, WWI Lieutenant Edward Sterling, played by Matt Ryan. 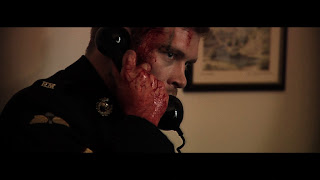 This is being described by some sites as Luke Massey's debut feature but here at British Horror Revival we know it's actually his third. As a teenager he made two amateur feature films: violent rape revenge thriller The Found Not Missing and one of several dozen zombie films called Within the Woods. I don't know whether either of those got finished.

Warhouse is his first proper movie, with real actors and everything, and looks great. It has been produced and co-written by Benjamin Read whose day-job is publishing reprints of 19th century illustrated children's books!