Image let 'Don't Let Him In' out 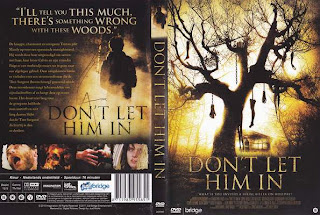 Via Dread Central comes news that Image will release Kelly Smith's Don't Let Him In on US DVD on 3rd January. Not to be confused with Hammer's Let Me In, this is an indie horror flick which was screened at this year's Festival of Fantastic Films, but only after I had left so I haven't seen it, though I have heard good things.

It was released in the Netherlands in August and in France (cover-mounted on a magazine!) in September. No news of a UK release yet.

Synopsis
What if you invited a serial killer on holiday by mistake?

Handsome, charming and arrogant, Tristan has picked up Mandy on a one-night stand. The love-struck girl invites him to a rural getaway with her brother Calvin and his girlfriend Paige, an emergency room nurse.

But Tristan has secrets. He needs to get out of the city. And suspicions grow when a local police officer warns the group that a sadistic serial killer is plaguing the area.

Dubbed the Tree Surgeon, this brutal psychopath ritualistically slaughters his victims, hanging their severed body parts in the trees as unholy offerings.

That night a delirious, half-dead stranger arrives, his stomach slashed open. Paige saves his life – but is Shawn the innocent hitchhiker he claims?

Doubts begin to breed. Then the killings begin, and suspicion spirals into paranoia, climaxing in a shocking revelation and a punishing battle for survival as the Tree Surgeon drags his final traumatized victim into his lair…

DON’T LET HIM IN is a nerve-bludgeoning horror thriller which combines slow-burning suspense with visceral, graphic shock.
Posted by MJ Simpson at 07:53