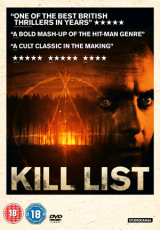 The over-rated, over-hyped Kill List is out on UK DVD and Blu-Ray on 26th December. I know some people think it's a great movie. Personally I think it's the Emperor's new clothes.

I actually really enjoyed Kill List right up to the end when it suddenly stopped - the laziest, dumbest cop-out of a non-ending since The Blair Witch Project. It's clear that Ben Wheatley didn't bother to work out an ending to his story but correctly surmised that there are plenty of people who will assume that something they don't understand must be really clever.

I'm told the film greatly improves on a second viewing. Call me fussy but I'm not in the habit of rewatching films that I didn't like the first time.