Coz Greenop's Wandering Rose is a beautiful, intriguing, ultimately gripping horror-thriller about a couple holidaying in the Cairngorms before the birth of their first child. In my review last October I praised the "fine, taut script ... superb performances and strong, confident direction." I said it had a "steadily growing sense of dread, some genuine effective scares and a satisfyingly bleak and enigmatic resolution." In fact I called it an almost perfect horror film.

Stu Smith over on UKHorrorScene evidently agrees with me; he picked Wandering Rose as one of his top ten films of 2014. 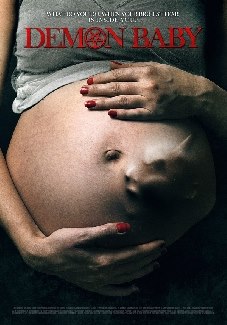 The good news is that Wandering Rose has been picked up for North American distribution by Entertainment One, with a penciled-in release date of April/May. The less good news is that, as is sadly almost traditional for a US release, the title has been changed to something awful and it has been saddled with a sleeve that bears absolutely no relation whatsoever to the film. I mean look at this.

There is no demon baby in Coz's film. There's no demon at all, or anything even vaguely demonic. It's a freaking ghost story for Christ's sake.

Nor is there a baby, as such. The lead female character is still in her first trimester and there is no sign of any sort of baby bump. But someone at Entertainment One has decided that what would really sell this film is a stock photo of a heavily pregnant woman that has been photoshopped to add the image of a satanic baby.

It's difficult to see what possible benefit can be gained from this. As always, it means people who buy/rent the film will be disappointed at the complete absence of babies and demons and will probably just be bored by the well-written characters and the gorgeous Scottish scenery. While those who would really appreciate a subtle and thought-provoking borderline psychological/supernatural ghost story against a background of lochs and mountains will assume this is exploitative trash and pass this one by.

I just don't get it. I mean, if they really want to change the title (and maybe Wandering Rose is a tad vague) why not call it... Phantom Pregnancy? Sums up the film. And, incredibly, the IMDB doesn't list a single movie or TV episode with that title ever.

To keep up to date with news, check the movie's Facebook page. To see how it should be marketed, take a look at the website.
Posted by MJ Simpson at 20:59