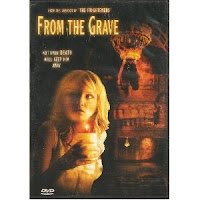 Has anybody else ever seen this? Aka Until Death aka Cat Flap (no, honestly: Cat Flap). Released on US DVD in 2003. That sleeve image isn't from this film!

A young woman's dead husband comes back to scare her, but he only does this about 20 minutes from the end so for most of this well-made but forgettable film it's just a relationship drama about how the couple, and the guy she should have married, all grew up together in the idyllic English countryside.
Posted by MJ Simpson at 22:35