The 'Carmilla' that never was

This very expensive-looking promo was shot in 2003 for a proposed feature film version of Carmilla. The director was Paul Wiffen, a sound designer who started off working on the soundtrack to Blade Runner.


The cast of the trailer included Tara-Louise Kaye, Samantha Golton, Lia Alu (featured extra in various Harry Potters), Karl Ude-Martinez (The Last Horror Movie) and Magda Rodriguez (whose many BHR credentials include Skare, The Witches Hammer, Man Who Sold the World, Seven Crosses and SNUB). Rodriguez has a bunch of stills and behind-the-scenes shots on her website. 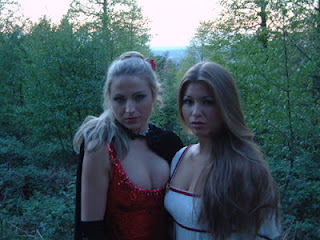 This was enough to attach The Cottage's Jennifer Ellison (who plugged the film in a TV interview), Simone Kaye (filming Dead of the Nite even as we speak) and Rik Mayall (who we all know will appear in any old shite). The film was still being touted around as a going concern as recently as last year, despite an extraordinary claim in 2009 that the makers of Lesbian Vampire Killers had stolen his ideas, and furthermore that no-one would invest in his film because LVK was so awful. This is described in detail in this report on Den of Geek. Well, LVK is rubbish, there's no denying that, but it's not exactly based on the work of JS Le Fanu.

More recently, Paul Wiffen has been concentrating on politics, standing as a candidate for UKIP, who initially threw him out the party when he responded to accusations of racism on a discussion forum by posting an astonishingly racist and bigoted rant, but then let him back in when he said sorry.
Posted by MJ Simpson at 21:10